We received a call from the owner of a 17th-century farmhouse in Buckinghamshire where the internal walls were showing signs of damp. They had already received a quotation from a large damp proofing company offering to inject a new damp proof course but thankfully they were unconvinced that this would solve the issues.

The dampness manifested in the internal walls as staining and salting. The existing finishes on the walls were not original and had at some point been replaced with modern waterproofing render which was approaching the end of its useful life.

Upon inspection of the outside of the property, our surveyor found that much of the original lime pointing had degraded leaving empty mortar joints in which rainwater was allowed to sit. Some of the masonry work was comprised of broken and shaped flint which was used in a traditional building technique known as “knapping”. Unfortunately, somewhere along the line, a modern cement had been used to point around this flint work. 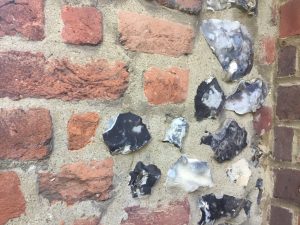 Past repairs with hard cement had to be carefully removed

Read on for the full details, or if you have a lime pointing project or any old building you’d like advice in, call us now on 0800 859 5938 or email us via our contact page.

Our aim was to achieve the following results:

Prohibit damage to the traditional fabric of the building

The mortar joints were carefully removed by hand using hammer and chisel. We wanted to avoid the use of a grinder so as not to cause any damage to the bricks. A feebly hydraulic NHL was then used to repoint the deeply raked beds. 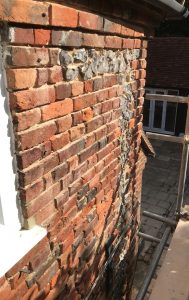 The internal plaster was removed and we used Sov Drain CDM 8 membrane which in this instance was there solely as an isolation barrier. Rather than replace the internal finishes with additional layers of plaster, we decided to apply a membrane to the wall which would protect the new finishes from contact with the damp substrate. This also meant that the wall could be decorated very soon after the works were completed, allowing the family to have their dining room back ready for entertaining.

Getting the balance right

Some would raise an eye brow at our choice of treatment on this period property, especially the combination of both modern and traditional repair techniques. While we do understand the importance of a purist approach, especially when dealing with Grade 1 listed buildings of historical importance, one must however, take into consideration the limitations associated with buildings that are in constant use by a homeowner. In this instance, the occupiers were a young family, therefore, we felt that our stance was completely justifiable given that the client wanted a fast and effective treatment which guaranteed an internal finish that could be decorated very soon after the works were completed. The dry lining of the internal will allow the wall to dry out and the repointing of the external using lime mortar will ensure breathability while also achieving a stunning and sympathetic finish.

If you have damp in your property, ACT NOW!